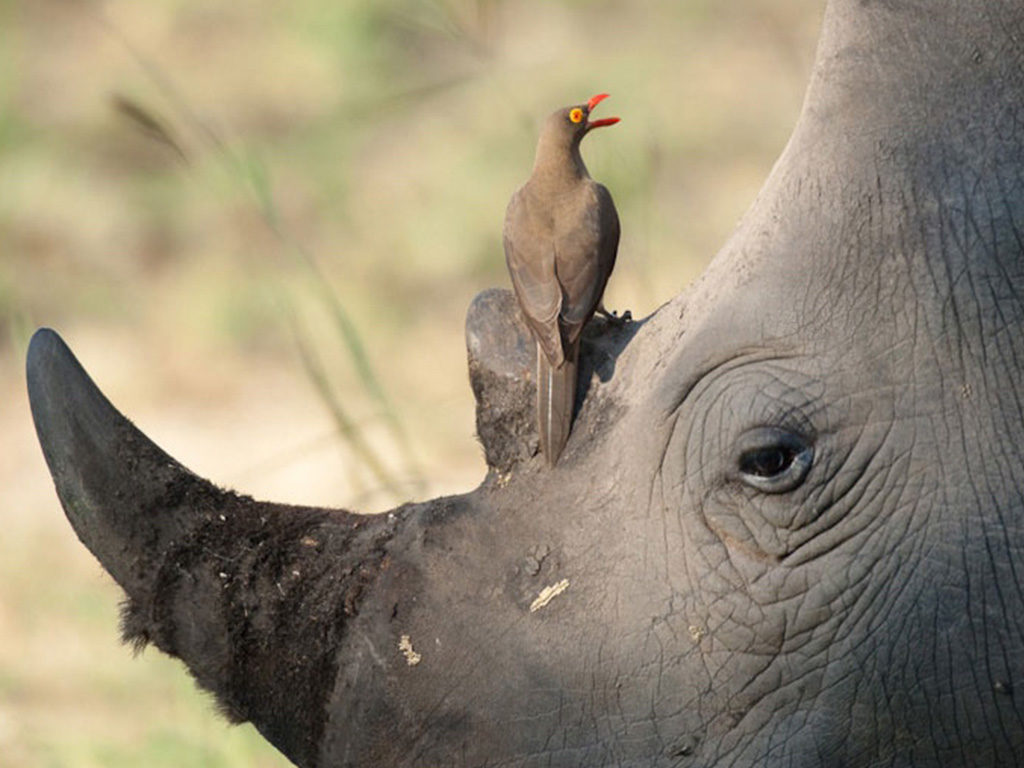 The Rhino and Her Oxpecker: Friend or Foe?

She stood in the shade of a giant umbrella thorn tree (Acacia tortillis), sheltering from the sweltering African sun. Well known as an insistent, somewhat grumpy leader, few would challenge her for this prime spot. Careful observers knew that her somnolent appearance belied her deep reflective nature, and her inclination for decisive action. Today she contemplated an ancient business relationship; a symbiosis with a smaller entity that proved recurrently irksome.

This was no ordinary leader. She had evolved her successful approach to life over millions of years. Behind her resolute square lip was a sensitive, smart survivor. Apart from her vision, she enjoyed exquisite sensory mastery of her world, appreciating subtle nuances that you and I would overlook. As with the best leaders, her sensitive soul contrasted sharply with her tough exterior.

I’m sure that you have been in many situations in your professional and personal life where you have weighed the benefits and drawbacks of a particular relationship. Sometimes we are happy giving, expecting little in return. Other times, we appreciate the generosity of a friend or business partner, trusting that we will pass on their kindness to somebody else, but knowing we can never adequately thank the current giver. Then there are those tough in-between situations, where both parties appear to benefit from a relationship, but the personal cost we bare feels prohibitive on most days of the week!

This was her dilemma today. The White Rhino (Ceratotherium simum) matriarch contemplated a relationship as old as the African Savannah. As long as her lineage had stomped the wide open plains of sub-Saharan Africa, they had been helped and hindered by a drab little bird affectionately known as the “tickbird”, due to its voracious appetite for ectoparasites living on her skin. The yellow-billed oxpecker (Buphagus africanus) lives mostly in the trees of the flatlands, and congregated in small flocks wherever large mammals graze or browse. On any one day, several birds would hop about her large shoulders and neck, pecking at irksome ticks and pests, and cleaning the abrasions and wounds inevitable from this harsh environment.

Early scientists described this as a true symbiosis where each animal benefited from their interdependence. The little bird was nourished by the plentiful food supply from her expansive hide. In turn, her wounds were cleaned and debrided, and disease-bearing parasites removed. In addition, the oxpeckers would detect the approach of dangerous predators before the rhino, who suffered poor vision. Feline attackers approached rhino with the wind in their faces, surprising the gentle beasts whose exceptional sense of smell would otherwise have detected the danger earlier. So, the presence of the skittish birds that flew off with loud alarm calls as soon as they detected danger appeared to be valuable to the hulking giants.

Modern scientists have questioned the equity in this relationship. It appears more complex, with the upside more squarely owned by the bird. Careful inspection has revealed that the ectoparasite count is no lower in animals frequented by birds than those without the entourage. More than this, close evaluation of skin wounds shows that those animals hosting birds actually have larger, more complicated wounds. This makes the oxpecker an “obligate partner” in the relationship, almost a parasite in its own right!

Interestingly, the oxpecker is not the only feeding partner of the white rhino. Cattle Egrets (Bubulcus ibis) are tall white birds with dapper plumage that walk behind large ungulates, eating escaping insects that flee their heavy feet. They are less intrusive, neither annoying nor damaging their feeding partners. The large mammal benefits from the egret early warning system. They fly off in alarm as readily as the more irksome oxpeckers.

This tableau makes me think about the many relationships, both formal and informal, that I have enjoyed in my professional career. I hope it provokes you to think a little about your own ecosphere, helping you to evaluate more accurately the bi-directional value in your dominant relationships. The story includes an implicit suggestion that you appreciate your quieter colleagues, who may be even more helpful to you but without the high cost of the aggressive parasites that invade your life under the guise of symbiosis. My enduring advice: when in doubt, give more than you receive. This is the way of value generation, health and wealth!

P.S. Unlike the story of the crocodile and plover, whose relationship appears to be legend rather than fact, the close association between the rhino and oxpecker are thoroughly substantiated by scientific observation, and readily apparent to most casual visitors to the magical African bush.

All stories by: Roddy Carter
Leadership Lessons from the Biggest Brains on Earth
Sibling Rivalry and Workplace Competitiveness