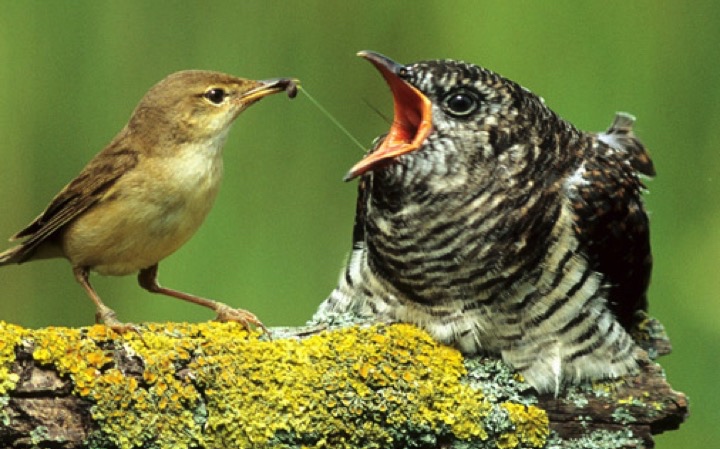 My interest in the outsourcing vogue prompted me to explore nature for examples of similar behavior amongst natural species. The journey quickly led me to a family of birds that outsource entirely their child-raising responsibilities. Cuckoo birds in Europe, Africa and Asia trick other species into hatching their eggs and raising their young.

In a prior article, we used renal dialysis to help us identify important principles in “healthy” outsourcing. The key principles include:

With this in mind, let’s explore the example of outsourcing cuckoo-style.

Best known for their melodious song, captured forever in the once ubiquitous cuckoo clock, the cuckoos are a family of birds belonging to 142 species and 26 genuses. It includes the roadrunners that have become famous through their cartoon antics. The family is spread around the globe, with some interesting behavioral differences between regions. The family name is onomatopoeic, and is derived from the call of the male Common Cuckoo (Cuculus canorus), previously known as the European Cuckoo. This species is a widespread migrant throughout Europe and Asia, spending the cold winters in Africa. Many species, mainly those that inhabit the “Old World” (Europe, Africa and Asia), are brood parasites. That means that they lay their eggs in somebody else’s nest, leaving the host birds to incubate the egg and raise the young chick.

Although somewhat dispassionate, this sounds like an excellent outsourcing arrangement, for the cuckoo! Incubating eggs and raising young imposes a high energy burden on adult birds. The cuckoo effectively outsources this burden to the host family, freeing themselves from the energy burden, while ensuring the propagation of their species. What’s in it for the host species?

Actually, host birds are not too happy about raising the offspring of another species, and the cuckoo employs several crafty measures to trick them into doing so. The first challenge is to get the egg into the host nest. In most cases, the female cuckoo is secretive and has evolved a very rapid egg laying process. She sneaks into a temporarily vacated nest, and furtively drops in her own egg, disappearing before the host bird notices the intrusion. The male cuckoo will sometimes distract the current occupants while his spouse uses the back door into the nest. The egg itself is reinforced with a tough outer layer that is thought to be protective against high speed drop-and-run laying behavior.

Once in the nest, the cuckoo has to ensure that the egg goes unnoticed, or is at least tolerated by the host parents. In some cases they use mimicry, laying their eggs in nests of birds with similar looking eggs. In other cases, the cuckoo lays a “cryptic” darkly colored egg in an attempt to hide it against the dark backdrop of the nesting material. In extreme cases, cuckoo parents threaten the host parents like gangsters in a protection scam. If the host evicts the cuckoo egg or fledgling, the cuckoo parents destroy the host nest and contents. Over time, the intimidated host birds have recognized that it is better for them to raise a few cuckoo chicks than to lose their own home and offspring.

The cuckoo chick hatches before the host chicks and is a greedy occupant of the surrogate home. In most cases, the chick forces the host eggs and fledglings out of the nest with fatal consequences. It then begs for food with a persistent, loud voice, demanding the host parents to keep up with its substantial metabolic requirements. Once raised, the thankless young bird leaves the nest to start its own journey towards adulthood.

I’m sure that you’re beginning to feel, as I do, that this is not the exemplary behavior we expect in a mutually advantageous, value-balanced outsourcing relationship! Even if we withstand the temptation to impose human values on this natural behavior, it is clear to see how this relationship is defined as parasitism rather than symbiosis or mutualism. Or not?

There is some evidence that the host birds may benefit. Long-term data in crows has shown that parasitized nests are more productive than cuckoo-free nests. Cuckoo chicks secrete a noxious smelling substance when threatened, and it may be that this protects the native offspring as well as the parasitic cuckoo fledgling from predators. Other, non-causal factors may explain the observation, but it’s sufficiently interesting that scientists now realize that there might be other unrecognized benefits for host birds. It simply doesn’t make sense that any species wastes energy in raising the young of another, essentially competitive species.

I set out to find a natural example that would inform human organizational life. I hope that this comparison may instead spur wildlife scientists to further explore these apparently parasitic relationships to find explanations that better justify this curious natural phenomenon?

All stories by: Roddy Carter
Outsourcing in Medicine; Lessons from Dialysis
Innovation Guidance from Mother Nature